No picture today sorry! Forward with the news!

A Noble Curse
I'm changing the process that applies to creating this. I'll be writing out the story first and yes... it takes more time. The reason being is that this method allows me to see the story flow better, rather than a flow chart of what I want to happen. With the changes that I made to the original... I'll need to write out how I want the story to flow.

For trivia: I never finished writing any books that I started when I was younger... but I DID draw out what I had written and more. That's where the method originates from! (And that's where I also found out I would be a terrible writer)

Spero: The Ocean Divers
This is still going as planned. I've not started the code work other than the template for the game (in Ren'Py). Using random images instead of what should be there is difficult and confusing so this will have to wait until I'm in the UK.

Speaking of which: By the next update post I'll be back in the UK! My holiday is ending soon (Well, my time overseas anyway).

As for the poll... again that will have to wait until I'm back in the UK. I'm assuming it's something to do with the browser or my netbook messing up. 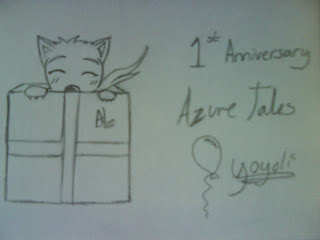 Azure Tales' 1st anniversary has come! Wow it really has been a year since I shouted "It'll be Azure Tales!" at the laptop (to my brother over a video call).

It may not seem like we've done much (Having only released a short visual novel) but Azure Tales was built from scratch and has made a lot of progress from being just an ambition in my head. I may still be a one-man team, but I have had plenty of support from my family and friends (and still do!). So a big thanks and cheers to them! If it weren't for you guys, I'd never have had the courage to even think of starting up Azure Tales.

With that I look forward to the future progress of Azure Tales and all my projects. A final thanks to all of YOU as well! Your encouragement and kind words mean a lot and I hope you will continue to enjoy the projects I release.

A few things to mention and announce today!

First of all A Noble Curse is on hold. I say that, but what I mean is I'm rewriting it again. But not changing the entire thing... it's going to take a while to work out in short.

Spero: The Ocean Divers however is now taking my full attention (As well as a few collaborations I'm working on... more on that another day). The script is pretty much done first draft wise! Louis is a merman soldier and Phoebe plays as a mermaid guide. Can I just add that Louis is the manliest character I've ever drawn (Besides Gil XD)

Voice actors! This post is mostly directed at you. I won't start holding auditions until I'm back in the UK because I can't really edit them here (Cut them line by line for example). There will be a few things you should take into account:
There's a lot more but that's the basics. I'm not overly fussy on quality since this is voluntary but think about if you play a game and all of a sudden you hear static when one character talks. It's not very good XD

Also we'll be running polls on the blog! Some for fun and some are genuinely for feedback. This time it's for fun. Who is your favourite character in Spero: The Forest Dwellers? I'll draw a picture of the winner (and runners up) for the update after next ;3 You can find the poll at the top right of the blog.

[Edit] The poll isn't letting me add more than 4 answers for some reason so please wait until another day!
Posted by Yoyoli at 14:57 No comments: