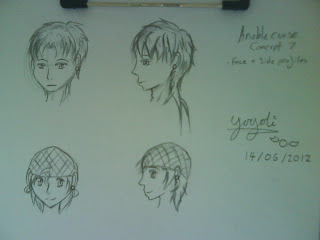 [A Noble Curse]﻿ - The main characters

So after a bit of debate I decided to do an update post every 5th and 20th of each month. The only exception being when I'm really busy that day so it'll either be postponed or posted a bit earlier.

The cast of A Noble Curse is completely designed now and the chapters are ready to be storyboarded. The first chapter is ready to be drawn out properly! (Shame I won't until I get back to the UK, but planning it all now saves me from having to plan it then find out it's poorly portrayed)

As for Spero, I'm still writing up the script and doing some concept sketches. It also gives me a chance to go outside and snap some references with a camera (If only it were a nice day for me to head out to the beach D: )

A Noble Curse
Spero: The Ocean Divers
For those asking about Spero: The Forest Dweller updates, I can't work on that unless I'm in the UK. I've got limited time and resources while I'm overseas, so don't expect any updates on it for at least a few months yet! Also if there are any Linux users who can't play the game let me know and I'll upload a version for it (The only reason I haven't done so is because it's untested).

Speaking of Spero: The Forest Dwellers, who would like voice acting included? I'd make an option for you to switch it off of course but I've had a few volunteers for voice acting. Let me know your thoughts on it!
-Yoyoli
Posted by Yoyoli at 11:00 2 comments:

It's been 1 week since Spero: The Forest Dwellers launched and I've had some great feedback and support! Thank you all who have enjoyed it so far. I'm sure those who have had a play will have guessed what I'm announcing today, and those who follow us on Twitter (@AzureTales) will have heard a little about Project 3 already.

First I can unveil Project 2 is in fact the next chapter of Spero! Those who got the 'True ending' will have seen a sneaky preview of the location. The next chapter is titled:

The chapter had already been planned from the start, and I've started the script (Reverse order on what I worked on for SperoFD which started with the art first). I've no release date yet since I'm currently overseas and can't do any final artwork. The visual novel is planned to be longer than SperoFD though (there's a lot of text for this one!). More details on the game will follow once the script hits about 50% done.

Those who follow us on Twitter will know that the Project 3 is a manga series! It spans about 9 chapters (probably about 3 books if it were a physical copy) and a special. The manga will be FREE and available to read online once it's done (I'll release chapters per fortnight probably). I'm considering physical copies late into the future maybe ;P but the title is (subject to change):

The manga is set in the kingdom of Crylite, where a cursed beast roams the land and causes tame monsters to go on a rampage across the towns. A pair of merchant siblings, travel to help those who have been hurt and to find a way to rid the cursed beast.

That's it for this announcement! The next blog post will be a quick questionnaire about Spero: The Forest Dwellers. (I'm setting up an e-mail account as well) look forward to some work in progress art and more updates over the next few months.