First of all a huge apology for the lack of updates these past few months and the fact Spero: The Ocean Divers wasn't released on time.

A number of things has contributed to our lack of progress. Placement work is one of them, it's not long hours but I do end up taking a nap as soon as I get home and then most of the day has gone ^_^; Secondly is my room redecoration which is the original reason for the hiatus... Although my room is painted it's still not finished. I plan to finish that by the end of the year at least.

Secondly is a change in plans. To start Spero will undergo a major change in format next year. A beta of this format will hopefully be released in May 2014. As for a Noble Curse I'm lacking in some materials, but Chapter 1-3 is completed! I won't release it yet since I'm on limited free time to draw more chapters and it's not pleasant waiting months for another chapter!

Once again I apologise for the waiting. Early warning that my final year of university is fast approaching and we will be making less progress during that period as well.

Thank you all for your support up until now and I hope you continue to support us! It really means a lot! 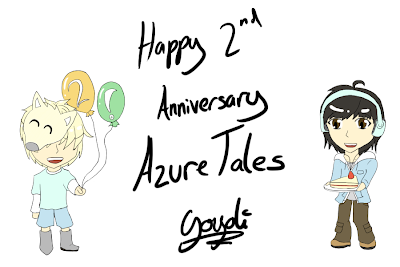 That's right! It's now been 2 years since I started Azure Tales!

Although we've made no progress on the surface we have learnt and developed within Azure Tales (As you've seen with the update posts).

Thanks again to everyone who continues to support Azure Tales as it grows and for your encouragement to keep progressing!

Email ThisBlogThis!Share to TwitterShare to FacebookShare to Pinterest
Labels: Anniversary

Hey everyone! I'm just going to announce that Azure Tales will be taking a temporary hiatus due to personal reasons.

The reasons themselves aren't major so don't worry. In short: my room walls and ceiling had reached a state which couldn't be ignored anymore so I'll have to repair and redecorate it entirely. I'm also using the opportunity to sort through the contents of my room (If you imagine many stacks of paper, that's basically what I have to sort through :') )

I'll still be working when I find the time, but there won't be a blogpost for a while. (Save for one more this month in 1 week)

I still intend to release Spero: The Forest Dwellers and Spero: The Ocean Divers before the end of the year. The manga (A Noble Curse) I'm not sure about yet.

Thank you all for your understanding. I'll blog again when Spero is near release, the Twitter account will still be updating when I get the time so keep an eye out!

*Phew* Thought I wouldn't make today's blogpost because we had internet issues ^_^; but here we are! And today I give you a preview of how Spero will now look:

It's actually just something I whipped up in Photoshop but that's how it should look. Oh and I've also included the boys new design. He looks much healthier now XD (Still a bit on the girlish side but he's still young). That's also an old background, I need some tree references.

Also rewriting the script, the old one felt really repetitive. Look forward to it!

It's time for another update!

Decided to talk more about A Noble Curse today. As you can see I've changed Gil's hat (Since he looked too much like Apollo in Spero) and his colour scheme is green rather than red. Al had the most changes though including his uniform and hairstyle.

I made a colour sketch to get a better idea of how they'd appear if they were in an anime (I wish!) It's only a basic, unfinished sketch but I hope this reassures you I'm still working on the manga series :D

There's not much to say today, Spero is still undergoing art and script changes.

Email ThisBlogThis!Share to TwitterShare to FacebookShare to Pinterest
Labels: A Noble Curse, Update

It's June! That means it's been over a year since I first released Spero and I still feel the nerves each time I think about the moment I uploaded it.

Without further ado, today's character is Conrad! The new hero in Spero: The Ocean Divers. The game will be played from his perspective:

That's his normal expression. Unlike Miyu who is generally cheery and surprised by every development, Conrad is very calm and serious. He's older than Miyu by two years as well (Age: 16) and the game takes place probably a few months after the original.

The game setting is further away from the Forest and, as hinted if you unlocked the 'True Ending', it's set on a remote island.

One more piece of news: I've changed the appearance of both Albert and Gilbert in A Noble Curse. Again the hair was annoying me to no end ^_^;

Edit: I had this blogpost written early... then forgot to upload it :')

Hey all! It's time for Heidi's new look! Again I've posted the original for comparison :3

Not much to say, been rather busy with requests. Some bad news: Again, Spero will have NO MUSIC or SOUND. It's going to be silent again because the people that have offered unfortunately have personal circumstances resulting in being unable to spare time to compose something. Sorry! Also I've tried the voice acting option again but I don't have the software or hardware to record properly T_T

I hope this doesn't put people off too much! On the bright side: I plan to release Spero: The Ocean Divers one week after Spero: The Forest Dwellers re-release.

Thank you all for your patience. It's taking me a while to get everything done but I will eventually get there!